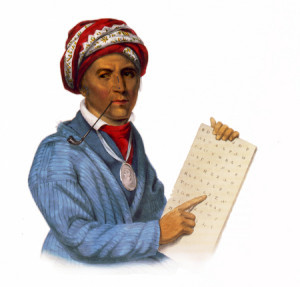 Did you Know… Sequoyah is credited as the creator of the Cherokee syllabary. He worked for 12 years to create a system of approximately eighty-six characters that represented syllables in spoken Cherokee. The first to read and write in Cherokee was Sequoyah’s daughter, A-Yo-Ka. Once the Cherokee officially adopted his syllabary, a large part of the Nation achieved literacy in a very short time.  Sequoyah is credited by the Cherokee Nation has having gifted them with the ability to communicate across long distances and throughout the ages by preserving the tribe’s history, culture, and spiritual practices through the written word.

Following the adoption of his syllabary by the Cherokee, Sequoyah continued to work for the benefit of his people, traveling to Washington, D.C.  to help negotiate treaties and aid displaced Cherokees.  Dedicated to uniting the scattered Cherokee Nation, he died around 1840 traveling in Texas and Mexico attempting to locate communities of Cherokee believed to be living in that area.