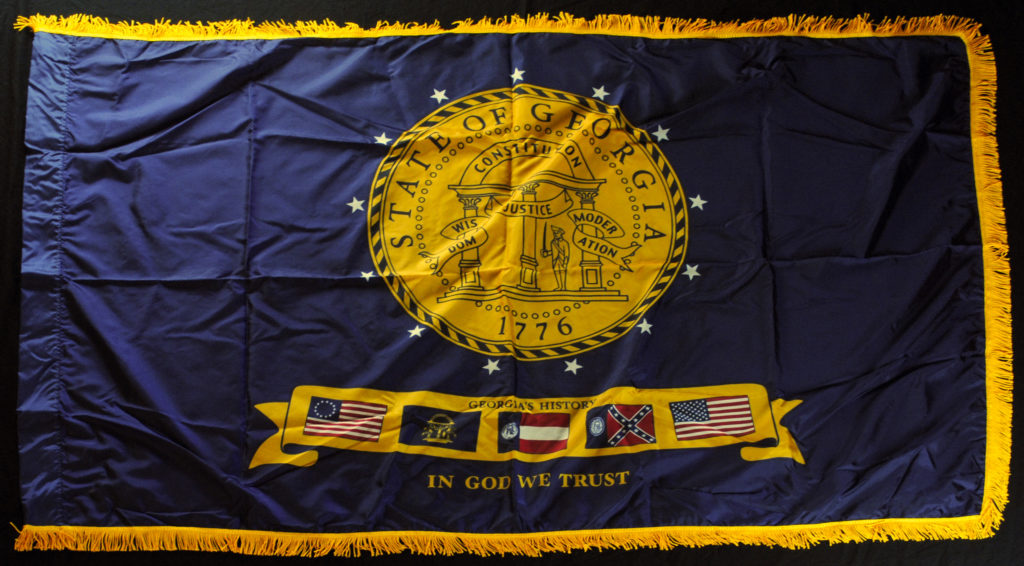 The Georgia State flag has changed many times since its original inception in 1879, going through various reincarnations. In 1956, 91 years after the end of the Civil War, and during the controversy over school desegregation, the flag was augmented to reflect the state’s Civil War history with the insertion of Confederate stars and bars on 2/3rds of the flag’s design. The 1956 flag became a contentious symbol during the height of the civil rights movement, which stoked continued debates that eventually led to its redesign.

By the early 1990s efforts were made to change the flag and remove the Confederate emblem. This specific flag was designed by architect Cecil Alexander in 2001. It consists of a blue field with the seal of the state of Georgia in the center surrounded by 13 white stars. This edition of the flag bears a gold ribbon that displays the five flags that have previously flown over Georgia: the Georgia Militia flag of 1861, the 1920s state flag, the 1956 flag, and the American flag. The current Georgia flag design adopted in 2003, after the short life of the one pictured here, displays the seal of the State of Georgia alongside the red and white stripes of the American Flag, and is modeled on the First National flag of the Confederacy.