Free and Open to the Public; Registration required

Join us online this fall for a series of conversations hosted by Dr. Stan Deaton, the Dr. Elaine B. Andrews Distinguished Historian at GHS, as he talks with some of the nation’s foremost scholars and leaders of the Cold War era in discussions focusing on leadership, American diplomacy, the Civil Rights Movement, the role of media during the second half of the twentieth century, and the ongoing impact of that period on our world today. 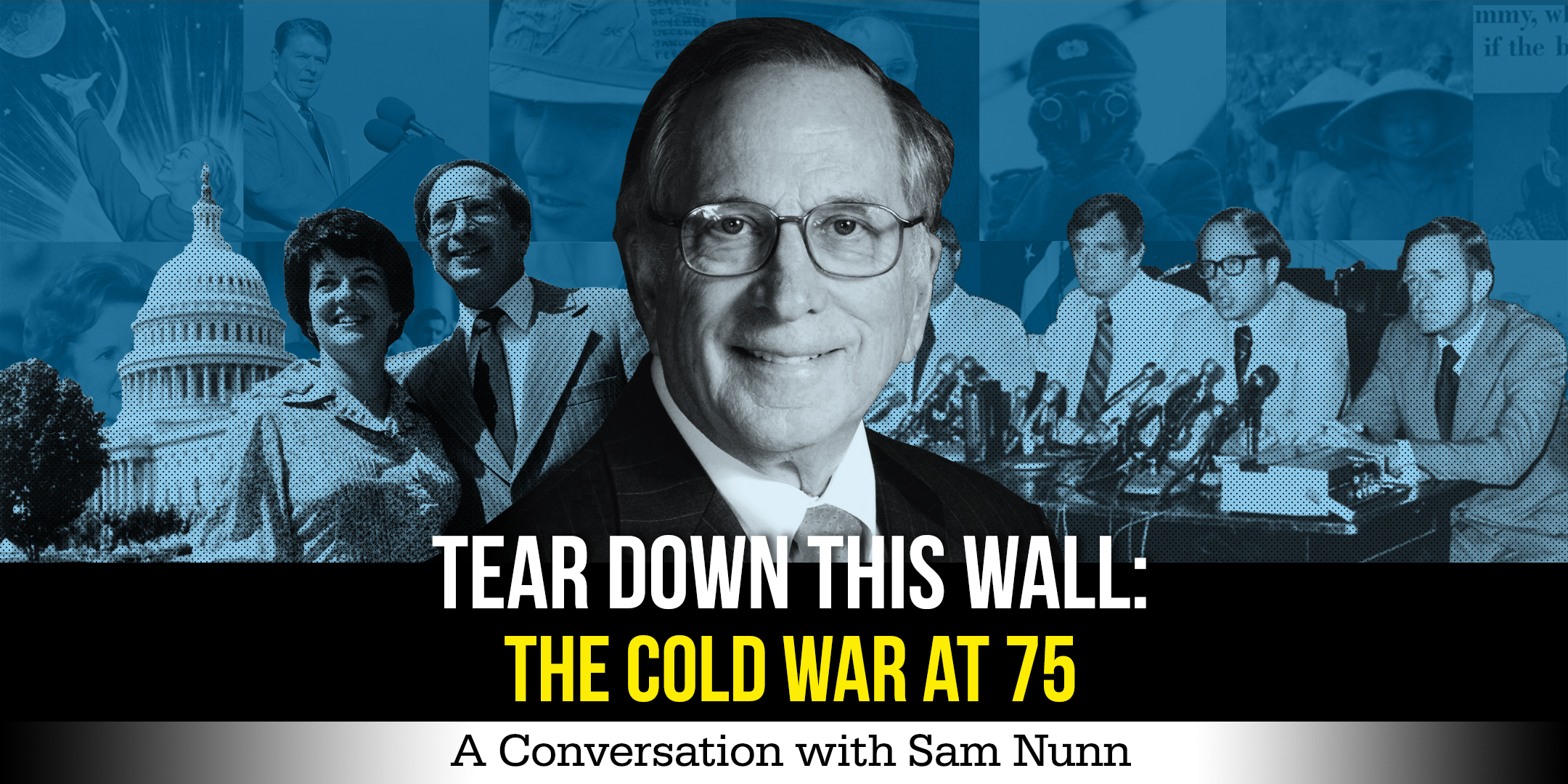 The Cold War at 75: A Conversation with Sam Nunn

Sponsored in part by

Join us for a wide-ranging discussion on the impact of the Cold War on American foreign policy and national security with a man who worked with the leading Cold War warriors, from Henry Kissinger to Margaret Thatcher to Ronald Reagan to Mikhail Gorbachev. Nunn served in the U.S. Senate for twenty-four years and was Chairman of the Armed Services Committee from 1987 until 1995. Upon retirement from the Senate, Nunn joined the law firm of King & Spalding.  In 2001, Senator Nunn co-founded the Nuclear Threat Initiative (NTI), a nonprofit, nonpartisan organization working to reduce the risk of use and prevent the spread of nuclear, biological and chemical weapons.  In 2011, Senator Nunn was inducted as a Georgia Trustee by the Office of the Governor and the Georgia Historical Society.

Kevin Gaines, The Cold War and the Civil Rights Movement

UVA Julian Bond Professor of Civil Rights and Social Justice, with a joint appointment in the Corcoran Department of History and the Carter G. Woodson Institute for African American and African Studies. Author of Uplifting the Race: Black Leadership, Politics, and Culture During the Twentieth Century (University of North Carolina Press, 1996).  The Civil Rights movement in America was carried out during the height of the Cold War, and with the fight against Communism as a backdrop. This conversation with a prominent Civil Rights scholar will focus on the tendency to equate the fight for racial equality and justice with America’s “enemies,” from Communism to Socialism to the antifa.

UVA Commonwealth Professor of American Studies and History, author of A Nation of Outsiders: How the White Middle Class Fell in Love with Rebellion in Postwar America (Oxford Univ Press, 2011). The Cold War’s impact was felt across all of American culture, from cinema and film (where the villains were often Communists) to television, to America’s consumer culture, to the race to beat the Soviets in space. This conversation will examine how the Cold War shaped American culture for over 40 years, the enormous impact it had on American society, and how it changed when the Cold War ended.

Audiences of all ages enjoy this popular, family-friendly, annual living history program at Wormsloe State Historic Site. The event features costumed interpreters and vendors offering students and adults a taste of the excitement and adversity of life for the first settlers of colonial Georgia.

Georgians and visitors alike experience our state’s rich history and cultural life as historic sites, house museums, art museums, and other points of interest in Savannah and throughout Georgia open their doors to the public, providing an exceptional opportunity to experience the history in our own backyard.

Thousands of costumed school children march behind student-made banners in commemoration of Georgia’s founding in 1733. This colorful parade of students, local dignitaries, costumed characters, musicians, and a military color guard begins at Forsyth Park and ends with a program in front of City Hall, where the mayor and other officials bring greetings and awards are presented for the annual Banner Competition.

The Festival culminates in Savannah with the Trustees Gala on April 24, 2021, when Governor Brian Kemp will induct the 2021 Georgia Trustees: David Abney, Executive Chairman of the Board of UPS, and Juanita Baranco, Executive Vice President and Chief Operating Officer of Baranco Automotive Group.  The Trustees Gala reigns as one of Georgia’s most successful non-political black-tie events, bringing together business, philanthropic, and community leaders from across the state and nation as the Governor and the Georgia Historical Society induct the newest Georgia Trustees, the highest honor the State of Georgia can confer.

Teacher Webinar: “And That’s the Way It Is: Television and the Cold War” Inquiry Kit

GHS Education staff will host a one-hour webinar featuring “And that’s the way it is: Television and the Cold War” inquiry kit. Educators will be introduced to the Inquiry Design Model including the contents of the inquiry kit as a series of inquiry-based strategies and activities designed to help them guide students to explore a curated set of primary sources. Activities are designed to meet the Georgia Standards of Excellence for fifth grade U.S. history. Students will explore Cold War America by focusing on the impact of mass media on events such as the Vietnam War, the Space Race, and the Civil Rights Movement.

Classroom Conversations: The Rise of Media in the Late 20th Century: A Q&A with Dr. Stan Deaton

GHS Education staff will host a conversation with Dr. Stan Deaton about the rise of media in the late 20th Century. Students and teachers can submit questions for Dr. Deaton prior to the program. Education Coordinator, Lisa Landers will facilitate the conversation and pose student questions exploring the impact of new media in the late 20th Century. The program is a companion piece to the Cold War inquiry kit and historical investigations into late 20th century leaders.

GHS Education staff will host a one-hour webinar providing instruction for teachers who want to participate in the annual Georgia Day Parade Banner Competition. Teachers can ask questions, register for the competition, and learn how to use GHS resources created to support teaching the banner competition theme, “Georgia on the World Stage: Leadership in the Late 20th century.”

GHS is pleased to introduce a new series of webinars for its Affiliate Chapters. Focusing on issues facing local history organizations across Georgia during the current period of economic and social upheaval, this series of virtual sessions will include resources, strategies, and a forum for discussion among GHS Affiliate members.