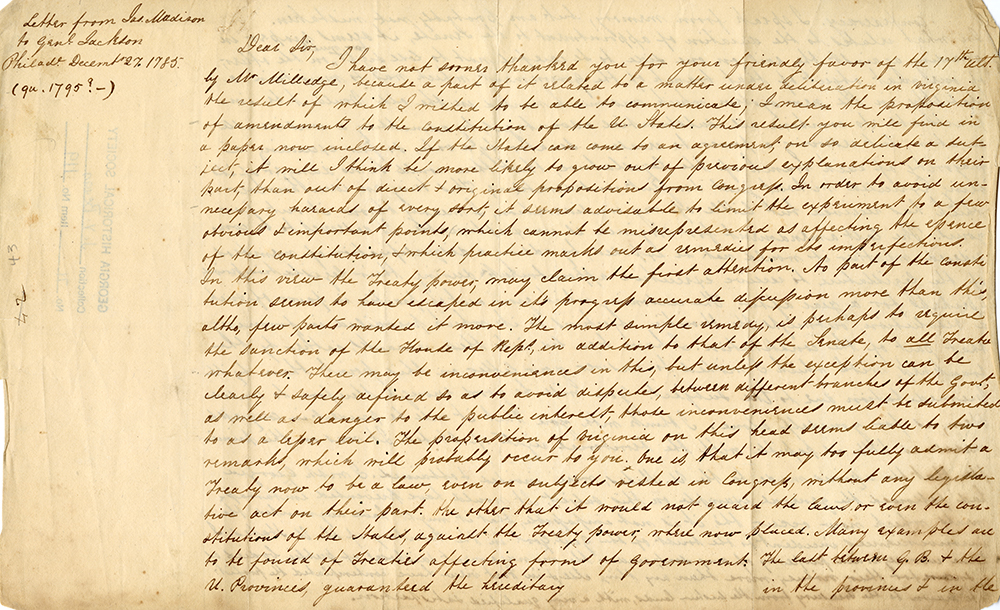 This month we continue our exploration of the Georgia History Festival theme, “United States Constitution: Ensuring Liberty and Justice for All,” with a look at collection items that relate to amendments to the Constitution.

This letter is important in its demonstration of the role of legislators in identifying, discussing, and proposing potential amendments to the Constitution. In this letter, written by James Madison of Virginia to General James Jackson of Georgia in 1785, Madison aims to solicit advice from Jackson on possible amendments to the U.S. Constitution. Madison says that amendments should be limited to those points “which cannot be misrepresented as affecting the essence of the Constitution.” One such point for Madison was treaties and their power. While proposing that all treaties should be ratified by both the House of Representatives and the Senate, Madison acknowledges that this could lead to confusion between treaties and laws if both are sanctioned by both houses of Congress. He further mentions potential concerns regarding the power of a treaty to supersede laws and the constitutions of the states. Though we do not have Jackson’s response, one can imagine that the very oppositions that Madison raised were likely the reason this proposal was never added to the Constitution. Despite the failure of this amendment, this letter demonstrates also that the Constitution was considered a “living,” organic document that could continue to be altered to meet the ever-changing needs of the young country.