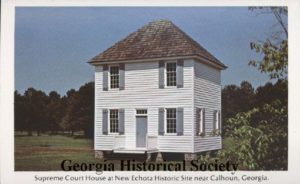 The 2018-2019 Georgia History Festival theme focuses on the U.S. Constitution and this month we are sharing materials from the GHS collection relating to the judicial branch.

In 1825, the Cherokee capital of New Echota was established near present-day Calhoun, Georgia. As one of the earliest known instances of national self-government by an Indian tribe, New Echota had its own Supreme Court House. Two years after the Cherokee National Council stated it would no longer accommodate land cession requests, the Cherokee Nation adopted a written constitution. In 1828, President Andrew Jackson declared the removal of the Cherokee tribes as a national objective, reversing the advances made by the Cherokee Nation. The Indian Removal Act passed Congress two years later. In 1838, President Martin Van Buren ordered the U.S. Army to gather the Cherokee people into stockades and marched them west to the Indian Territories of Oklahoma. This march is now known as the “Trail of Tears.”