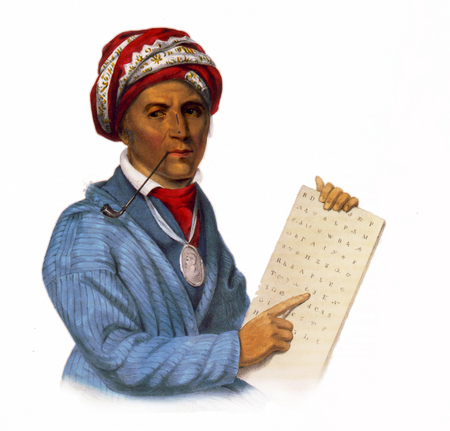 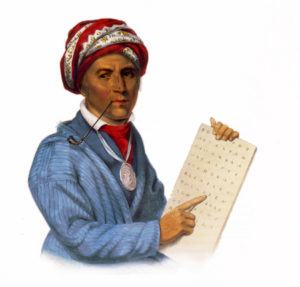 In keeping with the Georgia History Festival’s theme, a “State of Innovation,” November will highlight Sequoyah, the creator of the Cherokee syllabary, and the innovative use of his syllabary in print media at New Echota, Georgia. In particular, this month’s educational resources and events will focus on the historical context of Sequoyah’s daring invention and the role adversity often plays in spurring innovation.
Sequoyah invented a written language for the Cherokee people at a time when Indian removal policies threatened the cultural continuity and political sovereignty of his people. In 1821, Sequoyah introduced an eighty-six-character writing system to the tribal council that was based on the different sounds in the spoken Cherokee language. Within a few years, Cherokees had taught each other how to read and write using his new system known as the Cherokee syllabary. 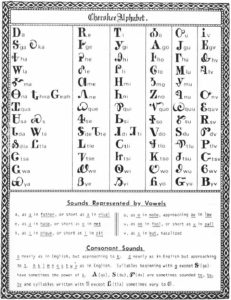 One innovation led to another as the Cherokee Nation used Sequoyah’s new language system to publish North America’s first newspaper written in a Native American language.  Titled the Cherokee Phoenix, the publication of a newspaper allowed the Cherokee people to spread news to its members and present the case against Indian removal to a larger audience.  The newspaper was first published in 1828 and included both Cherokee and English text. At the time of its initial publication, forces within the State of Georgia were working to remove the Cherokee and other Native American people to land west of the Mississippi River. The development of both the Cherokee syllabary and the Cherokee Phoenix exhibit true innovation — providing the Cherokee Nation with the means to communicate across distances and preserve cultural practices through the power of language.

GHS will be at Thomaston Middle School in Thomasville, Georgia, on November 2nd for a special in-school presentation focused on the historical context surrounding Sequoyah’s invention of the Cherokee syllabary. Students will use maps from the Georgia Historical Society collection to explore Creek and Cherokee removal from Georgia in the 1820s and 1830s.  This month, the Research Center presents “Sequoyah and the Power of Language,” a special exhibit exploring the history surrounding Sequoyah’s invention of the Cherokee Syllabary and its innovative use in print media at New Echota, Georgia. The exhibit features treasures from the GHS collection and is available for viewing at the Research Center during normal open hours.

Be sure to check GHS’s Facebook page for November’s Marker Monday posts! This month, the theme highlights Cherokee efforts to establish sovereignty and focuses on aspects of their civilization, such as the printing press in New Echota, their constitution, and more. Topics that will be explored include New Echota (the Cherokee National Capitol), the Cherokee Nation, Chieftains, and The Station. 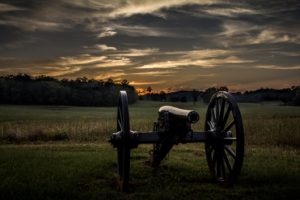 In addition to Marker Monday Facebook posts, GHS will also spotlight institutions that will be participating in Super Museum Sunday (SMS) 2017. November includes features on the Funk Heritage Center and Chickamauga Battlefield. Both organizations display exhibits on Native American history and artifacts.

Visit the Chickamauga and Chattanooga National Military Park on November 26 at 2 pm for “The Cherokee Land Lottery and Chickamauga Battlefield.” This month’s highlighted affiliate chapter event will discuss the Cherokee in the area, the Georgia Land Lottery, how the lottery system worked, and who received the 160-acre sections of land in what is now Chickamauga Battlefield. It will also cover Cherokee Removal from the area and the use of the Crawfish Road (present-day LaFayette Road), which still runs through the center of the park. Other GHS public programs taking place in November include the dedication of a new historical marker recognizing the 1996 Summer Olympics and the presentation of the Roger K. Warlick Local History Achievement Award to Historic Oakland Foundation in Atlanta.