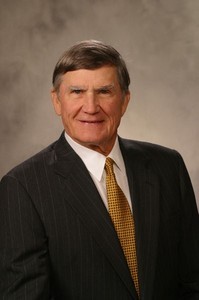 Thomas G. Cousins, after graduating from the Darlington School in Rome, Georgia in 1948, the University of Georgia in 1952 and serving in the United States Air Force, founded Cousins Properties Incorporated in 1958.

Cousins Properties is one of the larger equity Real Estate Investment Trusts in the country.  Cousins Properties developed such landmarks in Atlanta as the CNN Center, the Omni Coliseum, 191 Peachtree Tower, Bank of America Plaza, and Wildwood Office Park in Cobb County.  The company donated the land, provided the preliminary architectural drawings and guaranteed the construction cost for the first stage of the World Congress Center, Georgia’s world-class convention and meeting facility.  Current corporate projects include office buildings and shopping centers in Atlanta, Georgia, as well as Alabama, California, Florida, North Carolina, Texas, and Virginia.   The firm has enjoyed joint venture relationships with The Coca-Cola Company, IBM, Bank of America, Temple-Inland, and Emory University.

Mr. Cousins has chaired and is on the board of the Georgia Research Alliance, and is a director emeritus of Total System Services, Inc., and a trustee emeritus of Emory University.  He previously has served on the boards of NationsBank (now Bank of America), First Union, Shaw Industries and Inland Container Corp.  He has served as president of the High Museum of Art in Atlanta and is a member of its board of trustees, and also served on the board of the Woodruff Arts Center.  His business and civic board experience includes Central Atlanta Progress, the Metro Atlanta Chamber of Commerce, Salvation Army and Rockefeller University. He has chaired the University of Georgia Foundation and has been awarded honorary degrees from the University of Georgia, Emory University, and Oglethorpe University.  He serves as Chairman of the CF Foundation and is a member of its board of trustees.

Mr. Cousins and his wife, Ann, live in Atlanta.  They have two grown children and four grandchildren. They enjoy participating in their city’s many civic and artistic causes as well as spending time with their family and traveling for pleasure.